I like to go the extra mile to buy good ingredients but given it is August, I need to be sure that shops I buy from are open. Most local shops in Brussels are closed for holidays given they are family run. So I got really excited yesterday when i entered the website of Jack O’Shea yesterday to discover that he would be opening a chophouse in central Brussels in September.

Now, Brussels has its fair share of culinary destinations, but I have no doubt that this is going to be an additional ‘must visit’.

There is no question about the quality of the meat at Jack O’Shea. The meat which you get from this butcher whether it is a Wagyu beef t-bone steak, an Angus beef ribeye, an aged t-bone steak or just sausages from his large range (which includes mustard and spinach, Italian, beef and guiness, chorizo), are all exceptional. 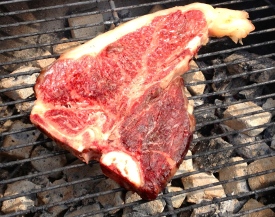 With such quality of ingredients and a hot grill, all you need is to make sure you do not overcook the meat. In terms of culinary pleasures, there is nothing like a beautifully age-dried t-bone steak cooked rare and to perfection. All you need is the correct amount of seasoning (sea salt) and the patience to allow the meat to rest. So I look forward to what Jack O’Shea’s chophouse will add to the Brussels food scene.

For those who have not heard about Jack O’Shea, he is probably one of Europe’s leading butchers, though maybe not as famous as the much talked about as Dario Cecchini from Panzano in Chianti. The latter left his mark by organising a funeral of the ‘bistecca fiorentina’ when it was banned during the mad cow crisis a few years ago.

Jack O’Shea opened his first store in Brussels in 1998 and in 2006 he opened a second store in London. While it is great to have such a butcher in my home city, you can now purchase his excellent range of meats online in Europe. He is famous for his dry aged beef which is incredibly tasty and succulent. He also became famous  for the grass fed and grain finished Angus beef which is perfectly marbled and a joy to cook.

He has been featured by some of the UK’s leading food writers and also featured in Heston Blumenthal’s “In Search of Perfection” series. He is one of those butchers who believes that every part of the animal should be used and you can find many different cuts which you might not find elsewhere.

In the video above, taken from the Jack O’Shea website, the butcher explains how to choose the perfect beef. In the video below, he makes what looks like a delicious Steak Tartare.

Jack O’Shea is in the European quarter of Brussels on Rue Le Titien. He is open from Monday to Saturday.